I just went on a two hour walk with seven dogs. Two of mine, two with one friend, and three with another. 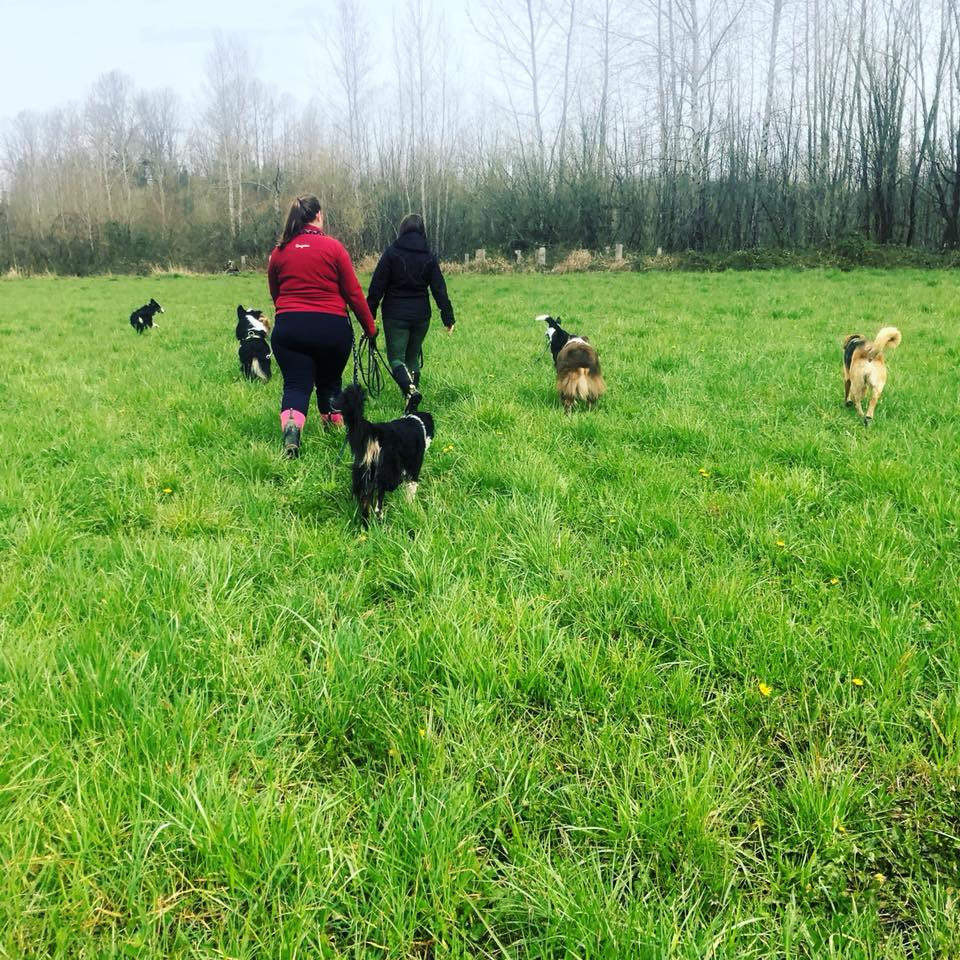 For two hours we had a lot of normal dog-dog communication and zero incidents in which anyone was hurt or uncomfortable. This normal communication sometimes included barking, snarling, snapping, and body-blocking. It also involved play-bows, friendly woofs, and zoomies. Everyone was off leash and we were in wide open fields, along riverbanks, and sometimes on wooded trails. One dog was brand new to the group, while the rest had only seen each other on one or two other walks before. In this group at least two of the dogs are typically labeled “reactive” while one is labeled “shy” and two are just “weird.” If you’re doing the math here that leaves two that are pretty rock-solid and stable. Still though, no issues. And I’d mingle any of my dogs with this group without hesitating. This is an experience not everyone gets to have, and not one that I think is vital to the health and happiness of dogs—but one that does contribute. Romping in a field, splashing in a river, and rolling on carcasses are activities best shared with others who appreciate them, after all. So what’s the recipe? Why can we bring all these dogs with “issues” together and have peace? And are we actually healing the dogs whose social struggles might otherwise prevent them from hanging out with their own kind?

First thing’s first—muzzles are your friend here. One of my dogs is muzzled any time we are likely to encounter dogs she doesn’t know. This is largely about her “reactive” responses (charging and barking) that I have observed in the past, not about a bite history. She will also bite another dog that irritates her, and while she has never harmed another dog I find their retaliative responses are less severe if she can’t actually make contact. My motto is when in doubt, muzzle. 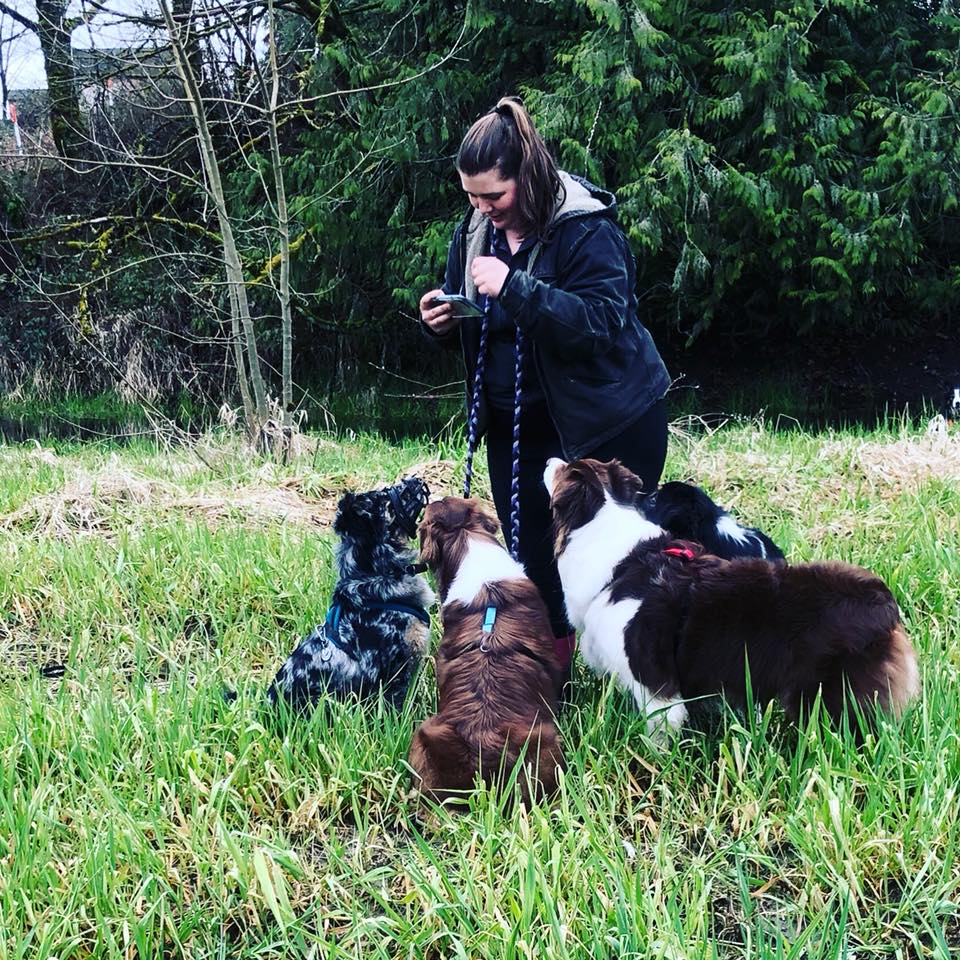 I find a well-fitted basket muzzle to be the number one contributing factor for achieving peace in a group like this and the reasons reach far beyond damage control; the muzzle magically makes the humans relax. Calming down and staying out of dogs’ social interactions with each other is a big part of dogs deciding whether they can be compatible or not, and sometimes that isn’t possible without a muzzle. Long lines can get messy in groups of dogs so they are not my preferred option here, but they can also be used if they help the humans chill out.

This absolutely can’t be successful if the dogs don’t have enough space. How much is enough depends on the group in question. Felix, for instance, likes a lot of space. If there is a dog in the group that makes him nervous he must have the freedom to take a wide berth around her—so a field is superior to a trail in these cases. Circling a large field until everyone is comfortable with each other before taking to the side trails is often a great solution for him, and I think a lot of other dogs might feel that way. A soccer field might not seem like a great place to walk dogs, but it can be the best solution for urban dogs to meet up. The primary problem with most dog parks is the lack of enough wide open space, and clearly defined entries and exits, causing the established dogs to bombard any newcomer at the door. Imagine walking into a crowded party and having everyone crowd you right at the threshold, asking you who you are and why you’re here. Doesn’t sound fun, does it? 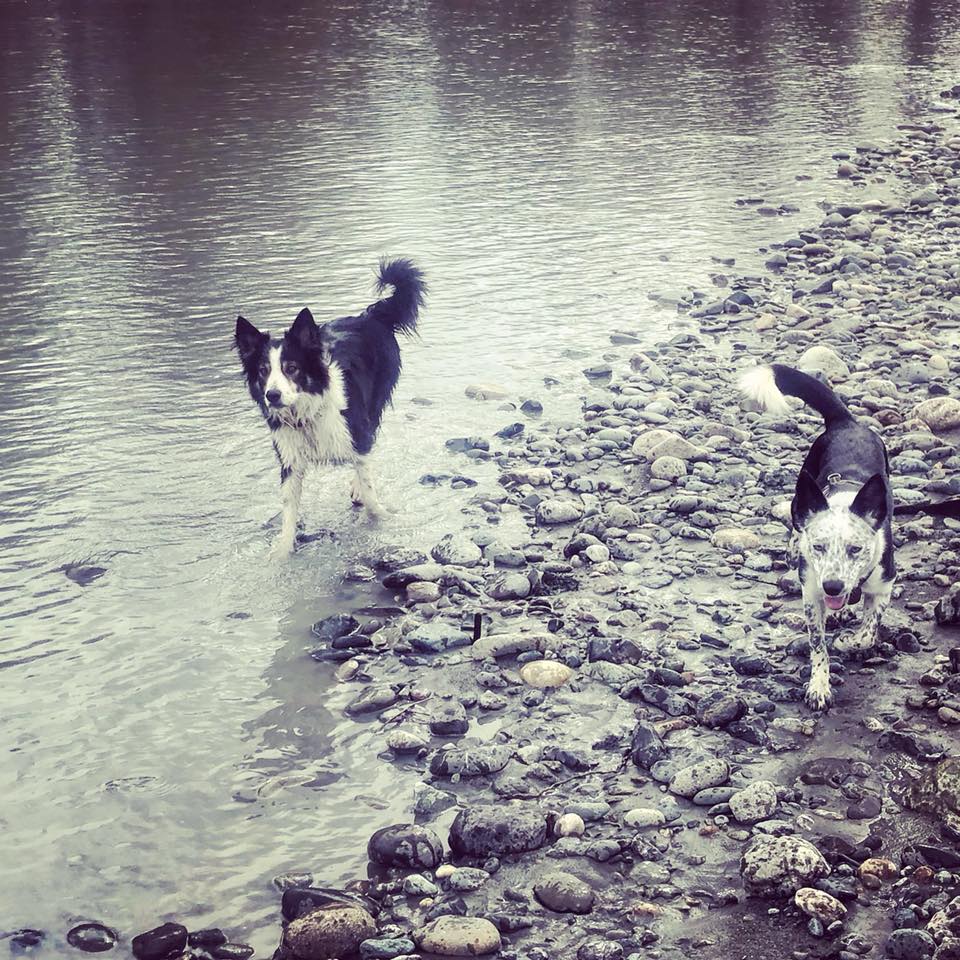 I was in a really nice dog park (and I’ve said that about twice total in my life) when I was out of town recently. It was an enormous area in the middle of a public park surrounded by a split rail fence. There were several wide openings in the fence where people could come and go from the off leash area; no gates. This not only prevented that awful WHO ARE YOU?! bombardment point but also prevented folks whose dogs had no recall from attending (from my observations). Every person I witnessed calling their dog was successful in doing so and all dogs had more than enough space from each other. The dog I was walking was able to get by without greeting any dogs at all, which is his preference. If there were more parks like this I’d consider dog parks a better option for my clients and myself.

In these group walks I am witnessing something that I have seen a few times before. I am seeing the reactive dogs neutralize. I am seeing the social weirdos exhibit socially adept behaviors. I am watching these dogs heal through doing. We encountered a few groups of “others” today, one group of conservationists and also a man and his dogs. The utter lack of problematic behavior when these things occurred was remarkable. I truly believe these dogs are all easing into their own skins, experiencing what it feels like to NOT freak out, and liking that feeling. 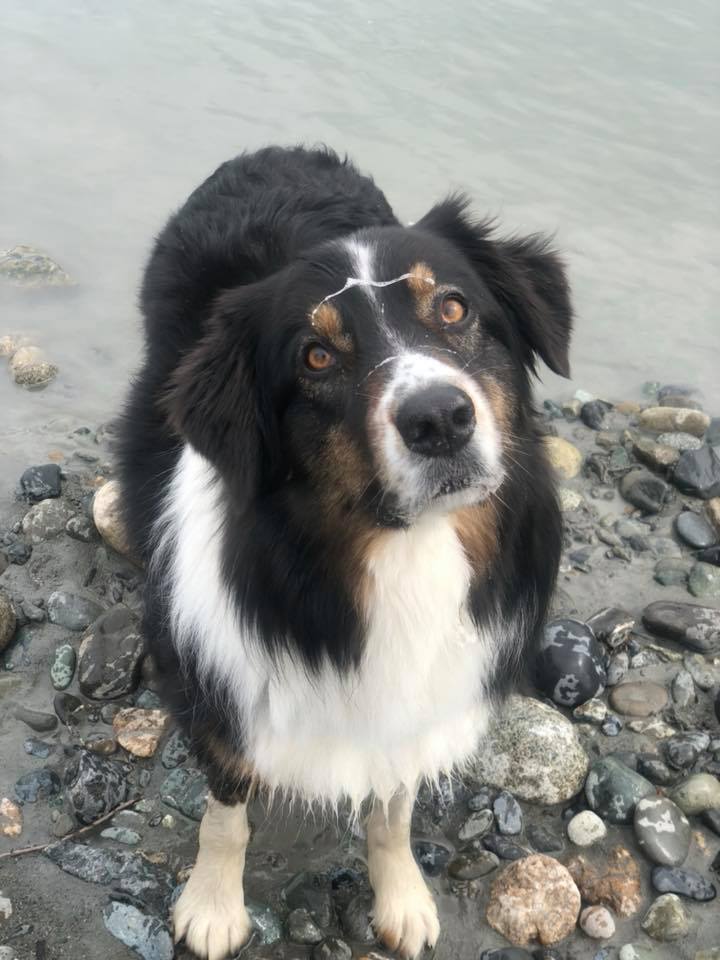 I know a little bit about this. There was a time that my anxiety would barely allow me to go to the grocery store let alone a walk by myself in the woods. Through the last two years I have done a lot of work on this front but the most beneficial thing I have done is to swallow my fears, stamp down my anxiety, get in the car, and hit the trails. Each time I was able to walk without panicking I got a little better. I, too, have healed by doing.

All of this has led me to a vastly different approach to puppy socialization than the one I used to take. Whenever possible, I think puppies should experience the world this way. They should be allowed to romp, roll, swim, and chase. They should be around adult dogs. They should learn by doing. This is how I raised Felix and his remarkable sociability with other dogs is, I believe, due to this upbringing (and of course, genetics, as both nature and nurture are always at play). Idgie, on the other hand, went to the puppy kindergarten classes I taught and also attended the dog daycare I was working for. She had hundreds of novel dog experiences. 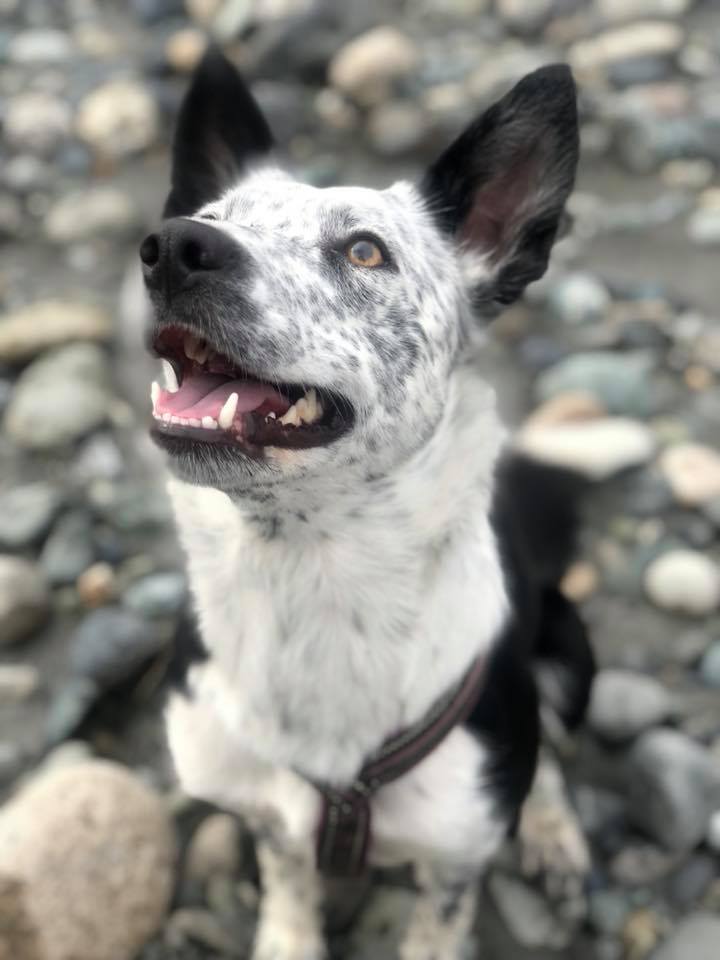 She is still afraid when a novel dog appears on the trail ahead of us (though she wasn’t scared today; this group is good for her too). I recently had a talk with a friend of mine who trains pet dog classes about how best to run puppy kindergarten. We brainstormed some good stuff—stay tuned and I’ll talk to her about it after she puts it to work.

So what’s the point? The point is get out there. Be less afraid to take your dogs out into the world with other dogs belonging to people you know. You might be surprised what they teach each other when they are free of leashes, gates, and human intervention.