Puzzles and Presence: a Puppy Update

A few weeks ago I wrote about my sister’s new puppy. He’s healthy now, taking on the world, and has thrown my sister–who hasn’t had a puppy of her own for about 15 years–a few curveballs. I learn from every puppy I raise, and from all of my clients puppies, and I am learning from little Kenobi (formerly Cosmos) too.

Right off the bat, Megan got a care package from me full of stuff-to-feed-the-puppy-out-of. Toppls, Kongs, and slow bowls galore!  This kid eats with his brain, and it has helped to cut down on other ways puppies use their brains that are not so fun for humans. When a puppy’s snout is stuffed in a Toppl, he is not also biting ankles or chewing shoes.

This seems like a no-brainer, but you’d be amazed how easy it is to just put food in a bowl instead. Resist! No bowls for puppies!

Contrary to what countless books, websites, blogs, and other sources may have us all believe, it is common for puppies to not take easily to being crated. Kebobi is a shining example; he is a skilled escape artist and not pleased with confinement. Adult dogs may need to be confined so it is wise for us to work hard on this skill. Kenobi is in an ex-pen with his crate, puzzle toys and other toys, for a few hours each day. Megan works hard to help him be tired when he goes in there, but she did notice he would vocalize when she first left, as well as when she first arrived home. When we discussed it I went right to work building a plan to help Kenobi feel safer in confinement. While each and every one of us has probably raised a puppy that was ignored as he wailed and whined from the crate or pen and turned out just fine, when we know better we really ought to do better and the research is clear: allowing a baby mammal to cry until they give up is not a smart thing to do.

First, I had Megan get Presence, a fantastic free app that allows her to video-monitor Kenobi via her iPad, on her iPhone, while at work (she is a professional dog walker and pet sitter) so that we could be aware of how much vocalizing and what, if any, stress behaviors were occurring. We found that certain times of the day it was easier for the little guy to relax, and we upped the puzzles and play for other times. We were also able to rest-assured that he was not having a panic attack when left alone.

Very important for all puppies is a plan for positive exposure to the outside world. We call this socialization, and while the jury may be out on how much weight is bears against a dog’s genetics in terms of adult behavior there is enough evidence to make me value proper socialization for pups I am involved with. Carefully armed with treats, an appropriate harness and leash, and the ability to say NO to humans that might be intrusive, Kenobi has been gradually and systematically exposed to the world.

Because of his early illness he wasn’t permitted to socialize with other young puppies at first, and as soon as he was cleared to meet some adult dogs he was allowed to do so. So far he has taken the world in stride; cruising the hardware store, watching the foot traffic go by his front yard (he lives in a busy part of Denver with lots of passersby), and meeting some of the socially savvy dogs my sister walks. 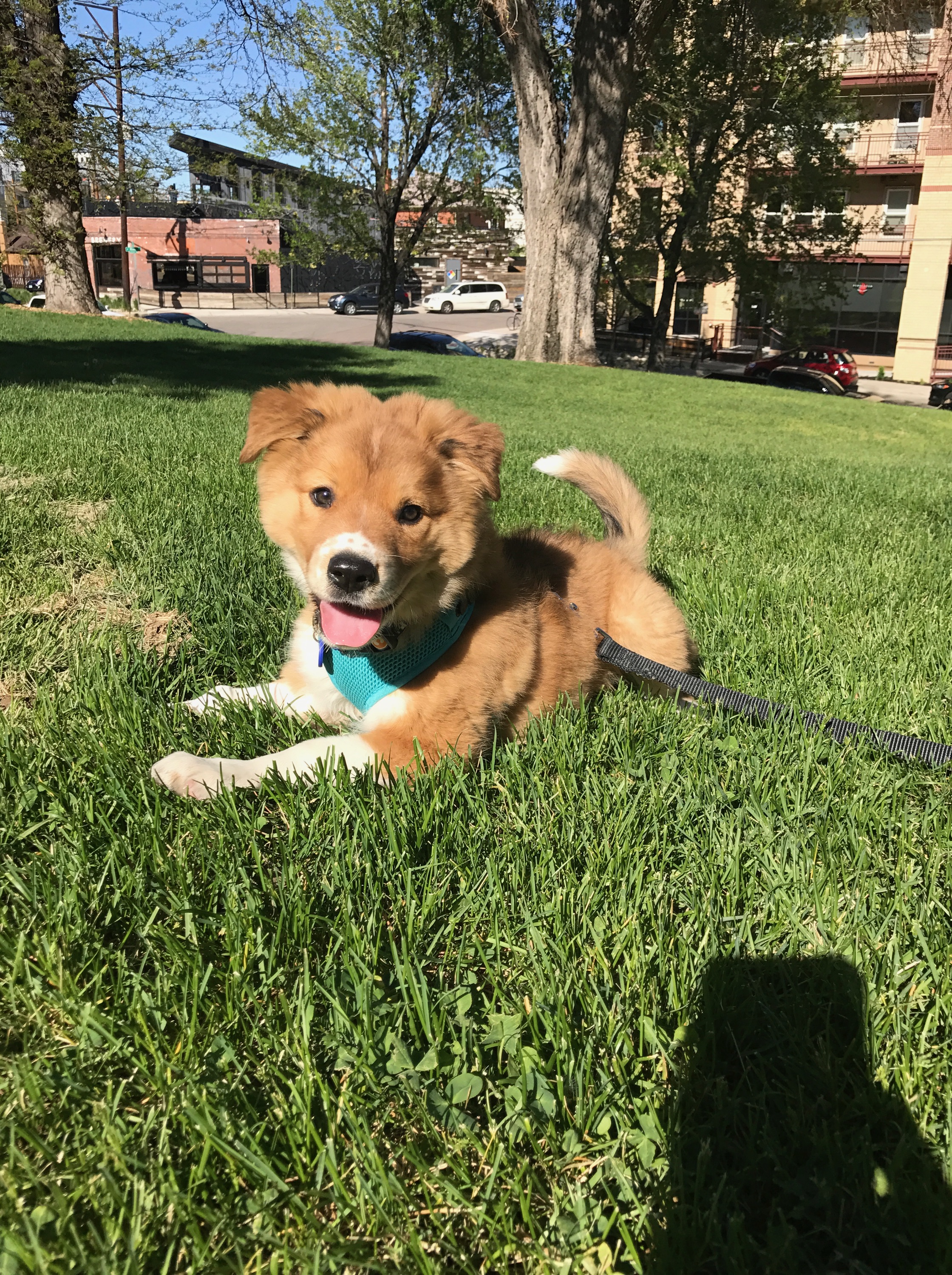 He is bound to meet something that scares him at some point, and when that happens Megan is prepared to give him the space he needs to observe it until he feels comfortable. So far he is all smiles and tail wags, loving his new life, as puppies should!

At home he is learning that cookies are more interesting than cats and chickens, that treats rain from the sky when loud noises happen, and that everyone that comes over is his friend. I get to meet him in a few weeks, and I am hoping he doesn’t grow up too much before then! He had a rough start but he really has a lot going for him, not the least of which being his awesome big sister Clementine and his loving new parents, my sister and brother-in-law. All puppies should be so lucky!