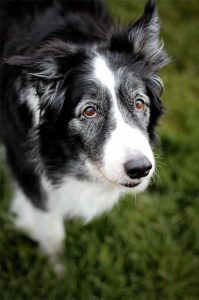 Kelso lived to be 14, and I hope for at least that long for all of my dogs. I know I was lucky, I just hope that luck keeps coming my way.

When my first border collie Kelso was a baby, around 12 weeks old, somebody tried to steal him from my backyard. My sister saw the hands reach into the fence and grab at him, she screamed out the window, they let go, and he ran for the house. They had actually removed a plank from our privacy fence. I reeled from this for weeks; unsure of what I would have done if my beloved puppy had disappeared. I had a newfound feeling; not more love, not more adoration, just that sneaky reminder of the finite nature of all things. Coming close to losing him was awful and traumatic and somehow changed my love for him to a more layered one.

Fast forward, I was walking Kelso with Idgie in knee-deep snow that was still falling. We were in a wide open field near our home, the dogs were off leash, and little four month old Idgie was frolicking and playing. A strange dog appeared out of nowhere, a hound mix that was intent on saying hello to my dogs. I grabbed Kelso by the collar, he was severely dog aggressive and I needed to manage the situation. The dog startled little Idgie and she bolted off into the white storm. I felt like I was in a nightmare; I was screaming for her but my voice was caught in the falling snow and she just kept running. Hot tears running down my freezing face I ran–more like trudged–through the snow after her. She made it across four lanes of traffic and ran all the way home, I found her on my front porch, quivering and afraid. I held her and sobbed on my living room floor until we were warm and safe-feeling again. Just like when Kelso was nearly taken, I was slapped across the face with the cruel reality that sometimes people lose dogs.

As most of you know, it has been nearly a year since I almost lost Felix. You can hear the whole story here if you want to, grab the tissues. There isn’t a day that goes by that I don’t wonder at the community that rallied together to save his life, and mine. That feeling I had with Kelso, and Idgie, is here again with Felix. For some reason it seems like my path to feel this again and again. The intense love and gratitude, the nagging fear of the inevitable, the almost-indescribable “what if” stab to my gut remains. It’s like bleeding out and finding a tourniquet you know won’t last forever.

So why do we do this to ourselves? Attach ourselves to lives so fragile? Give our hearts over to those who will, in all likelihood, die and before us whether tragically or not? I’m not actually sure I know the answer. But I know it has something to do with the short-term benefits that outweigh the long-term heartbreaks.

Watson had his first close-call last night and I’m not going to give you the details, but he is perfectly fine and I am left spiraling with post-traumatic stress. Dogs, man. Good thing they are so wonderful. 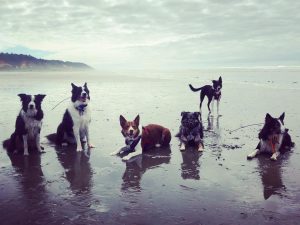