Ok, so this is a thing. People allow their exuberant, socially over-the-top dogs to approach your leashed/reactive/elderly dog in a public space. Chaos ensues. You leave pissed, they leave equally angry, and hopefully none of the dogs are hurt. Could this be better? I think it can, and it doesn’t involve changing the overwhelming social norm that dogs should accept other dogs of all varieties at all times (which we can all agree is absurd).

When I was a college student I had one dog, my border collie, Kelso. He was pretty severely dog-aggressive and he needed to be walked (I only had a yard later on in my college years, and even then he needed a walk!). I selected the remotest places to walk him that I could, but inevitably I would be bombarded by an off leash overly-friendly dog. I had choices: call to the accompanying human and hope a recall would prevail, ward off the dog myself with oft-violent means, or allow Kelso to engage in an altercation. Choice one, asking the human to call their dog, failed literally almost every single time. All it did was condition Kelso to believe the phrase “call your dog!” to imply imminent danger. Choice two made me uncomfortable. I remember clearly going home and sobbing after kicking a young golden square in the ribs after her owner failed to call her off. Choice three was bad for everyone involved; though Kelso had a relatively good mouth and almost never caused damage to other dogs it was emotionally distressing to everyone to be involved in a dog fight. I always felt I failed to protect him, and he would be that much more aggressive next time a dog approached. Perhaps the most prevailing problem was that I was already swallowing tremendous anxiety just to walk out my door, and each time something bad happened to me when out on a walk it was just more fuel for that fire. I found myself getting so angry at these people–these idiots–that it would wreck my entire experience. I even became unacceptably aggressive toward a man on a walk whose labrador approached my two dogs, on sit-stays (I was tying my shoe) on a trail. His girlfriend intervened, and looking back I think I could have been really harmed had she not been there.

Fast forward to now: this isn’t a problem for me anymore. And the public has not changed one iota. Kelso is gone, but if he were still here I know the solutions I am about to share would have made his life easier. So much of my work is like that–stuff that he would have benefitted, but stuff that came too late. His legacy is this blog, my podcast, and anything else I do, to try to make up for the fact that I didn’t get it together in his lifetime.

First and foremost, the public thinks your dog is safe. My neighbor’s three year old autistic child once grabbed Kelso by his scalp and shook before I could get there–we are all lucky that Kelso had an inexplicable fondness for children. I have interrupted when small kids reached their hands into ex pens and crates at a dog show while parents watched on with blissful ignorance. People are shocked that I like my dogs to wear basket muzzles around my toddler niece (my dogs have never once paid her any mind). That the public has a Disney-fueled perception of dogs as angelic beings incapable of harm will not change anytime soon. I’ve accepted this. It was the first step toward my walks being more peaceful.

After I accepted that people are just making a potentially-inaccurate assumption, I adjusted my attitude about the unwanted approach of strangers’ dogs. I literally trained myself to take a breath and say to my dogs in a cheerful tone “look! It’s a friend!” Is this a plan for behavior modification of dog-reactive behavior? Nope. But it made an enormous difference in my dogs’ own acceptance of the approach. Whether we like it or not, our reactions do influence theirs. So adjust your attitude, like it or not. Need some help? Here.

Now, that’s all well and good, but what if you have a Kelso on your hands? What if all the cheery phrases and acceptance in the world will not change the snarling beast that will appear if a dog gets within a 5 foot radius? The things I wish I had had for Kelso are these: long lines and muzzles. 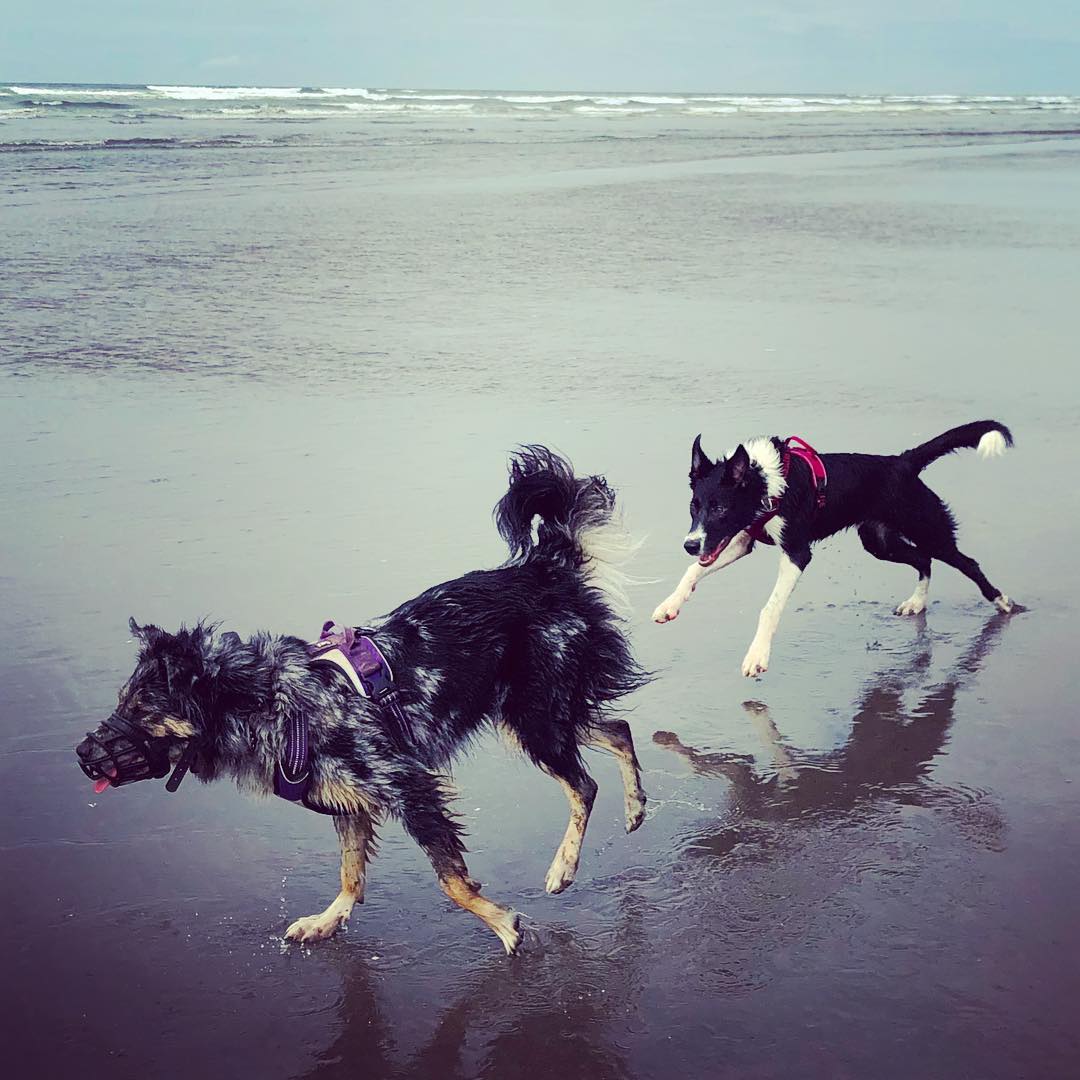 My experience with muzzles with Kelso was being forced to run him in one in agility class (or leave the class) and all that was available was a tight-fitting cloth muzzle. He promptly ran into a tunnel, lay down, and hid. I had to drag him out. Then I went home crying. Needless to say, my current love-affair with the basket muzzle was not yet happening. Had I known there were nicely-fitted muzzles that he could be trained to accept my life with him may have been different, but that’s ok. Now I sing it from the rooftops like he would want me to: if your dog is likely to bite a dog that invades her space, a muzzle can be a wonderful management tool. Dog is likely to approach other dogs and not recall? That’s where a long-line is your friend. Have both? Great, apply both management techniques!

Now, what if your dog truly isn’t the issue, but she’s elderly, or a puppy, or otherwise should not be asked to deal with the public at large? This is where I use three personal protection items, none of which are harmless, but all of which are more harmless than what might happen if an unwanted interaction occurs. These are nonviolent strategies that can be used in these situations by anyone. Here they are:

Sprayshield. Now, this one did enter my life before Kelso died, and I am so grateful. Because of it, I knew I could break up a dog-dog altercation quickly and easily without getting hurt. Buy it, carry it, love it. Effective and far less harmful than pepper spray, I have used it not only to break up dog fights but to ward off pushy intact males that wanted to breed my bitch in season!

An umbrella. Yeah, a cheap umbrella can do wonders to create a shield between your dog and the oncoming bombardment. Just teach your dogs that when you deploy the umbrella a treat scatter awaits them, and voila! Instant shield that scares most invaders of space and doesn’t bother your previously-conditioned dogs.

Throw food. Yeah, you know I love this solution to most things. Just the other week I pitched a handful of food at an intact male catahoula that was advancing on my group of four. They were not keen on him, his owner was calling to no avail, and I was close to my car just hoping to get out of dodge. So I chucked him some food, called my dogs, and off we went. If you want to get started citing allergies, pancreatitis, and the like, save it. If you fail to recall your dog, and throwing food is all that I do about it, you’re both lucky. 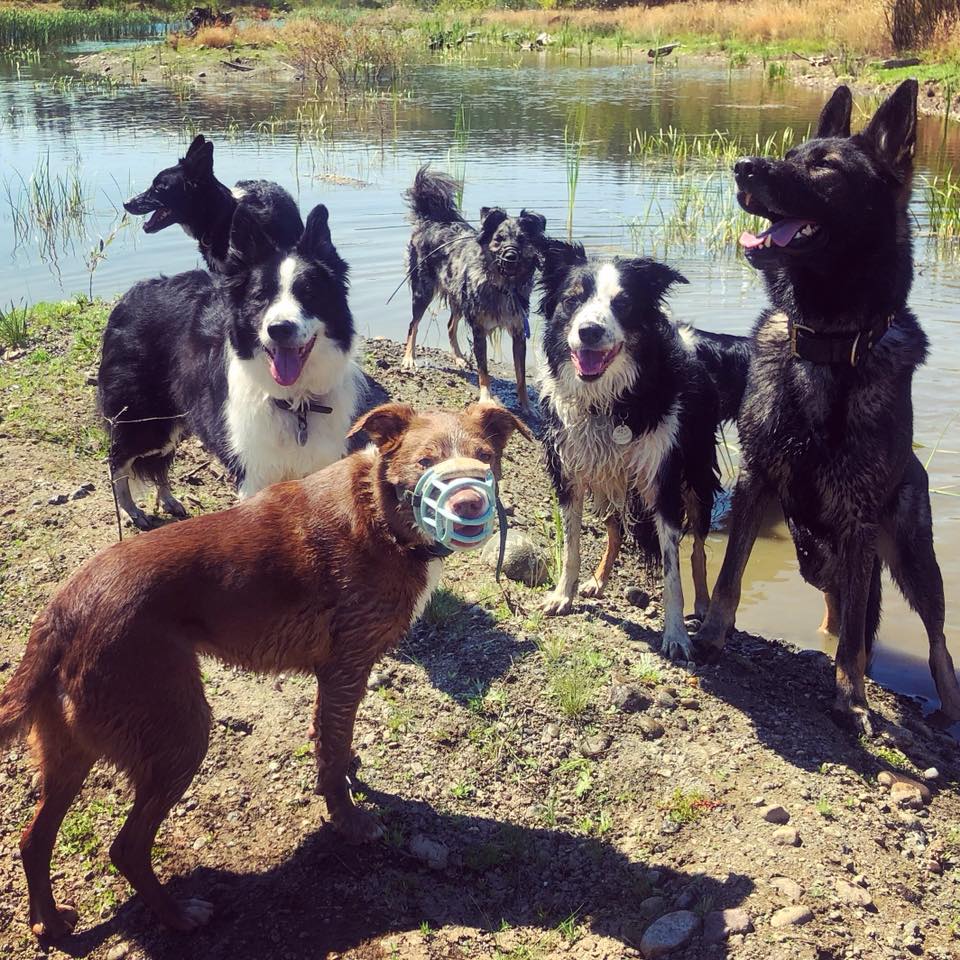 The bottom line is this: we all deserve to be out there in the woods. Our mental health, and our physical health actually requires it. Our dogs deserve it too, and we can work with the public on this one. We don’t have to always be fighting with each other.