Love the Dog, Not the Outcome

Last week I was listening to of my favorite podcasts, NPR’s Invisibilia, and the episode entitled “The Problem With the Solution” resonated so deeply with my life as a dog trainer that I knew I had to share it here. Go listen to it before you read this, if you’ve got the time. It’s worth your while, I promise.

The episode looks at different attitudes and treatment concepts for people suffering from severe mental illness throughout the world. Specifically, we learn as we listen of a town called Geel (pronounced “Hale”) in Belgium, in which psychiatric patients are, while under the care of doctors, placed in homes with families in the town. The families that live here take these patients in willingly and receive a small government stipend. They do not see this act as a burden, they call the patients “boarders” or “guests.” The reasons this is not done or supported in the United States are discussed briefly, but the main focus of the episode is twofold, and is what got me really excited.

First, acceptance might be more important than recovery where mental illness is concerned. And second, the patients in Geel all failed to heal under the care of their own families, while they function and get better under the care of strangers.

For a long time I have advised people whose dogs dig to give them a child’s sandbox for digging. I’ve advised people whose dogs shred paper to give them the day’s junk mail. I’ve suggested that people whose dogs express reactive behavior around joggers, other dogs, cyclists, etc. get in their car and drive somewhere more remote for their dog’s exercise. I have been criticized and told that none of the above are solutions. But I’d wager that none of them are problems, either. The attitude that we must “fix” our dogs who have behavioral concerns is the problem, and that same attitude–expressed toward the mentally ill–has long been left behind in Geel.

The podcast talks about a man they call “The Buttons Guy.” Every day, this man would remove the buttons from his shirt, one by one. His caretaker sewed the buttons back on each evening, only to do it again the next day. When it was suggested to his caretaker that she might use something strong, like fishing line, to make it more difficult or even impossible for this patient to do this, his caretaker said “that’s the worst thing you could do.” You see, the caretaker knew the man needed to twist his buttons from his shirt. Just like dogs need to dig, chew, bark, run, and generally be dogs. It was found in Geel that the solution is not to seek a solution. It is to decide that acceptance is more important than recovery. 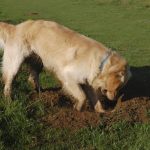 Love the Dog but Not the Outcome

Ask any dog trainer; our dogs are the last ones to get trained each day. They are in many ways the barefoot cobbler’s children. A smart trainer always consults a colleague if her own dog is having a problem. I can’t tell you how many times I stumbled across a solution for one of my own dogs when a client brought me the same problem. Why can’t dog mom brain and dog trainer brain fuse into one? It is suggested by the people who have studied Geel that if you love someone you will be overly invested in their outcome. That’s why the patients aren’t with their own families; they’re with other families. That’s why I can look at a severe behavioral case and make cool-headed decisions, so long as it’s not my own dog we are talking about. Turns out that when it comes to healing mental illness, be it dogs or people, we can actually care too much.

So what do we do? The dogs I work with live in homes with families who love them; families who must do the bulk of the work to help these dogs function better. The best I can do for them is to counsel them on the two pieces I describe above: focus on acceptance over recovery; and though you love this dog, let go of the outcome you are desiring.

I am not perfect with my own dogs, and so setting an example for this has been a priority in my head, particularly in raising my young dog, Felix. Sometimes Felix gets upset and hides. The first time I remember him doing it he was about four months old. A metal baby gate fell over, clanging on the floor, narrowly missing his tiny puppy body. Needless to say, it frightened him quite a bit. He hid under the bed for the rest of the night. It bothered me considerably that he needed to do that, but I let him. And you know what? He recovered. If I were particularly invested in him never hiding again I’d both limit his access to hiding spots and countercondition his triggers. According to Geel (and I agree) both actions would be counterproductive. As it turns out, he rarely hides anymore. Over Fourth of July weekend he spent some serious time in his hiding spot, and I was actually quite grateful that he knew that coping mechanism. While another dog of mine shook and paced, he was sound asleep, in his safe place.

So the next time your dog exhibits a behavior that bothers you, stop and think. Is it actually a problem? If it is, ask someone to help you help your dog in a way that is respectful; a way that honors her need for that behavior in the first place.  If not, go with the flow. You might be surprised what happens.