Much Ado About Sniffing

I once wrote in-depth about what functions sniffing serves and why it’s such a vital part of dogdom and one to be respected. You can find that HERE. Please read it first.

So why am I here, writing about it again? A friend’s facebook thread asking “what can we do about sniffing during agility training?” (paraphrased) garnered 200ish replies in a matter of hours today, so apparently the topic still requires some discussing. Since I already wrote about why we should all chill out about sniffing, let’s talk about what to actually do in the very moment your dog is sniffing (and you’d rather he be doing something else). Actionable steps are, after all, what the people want.

A language of consent 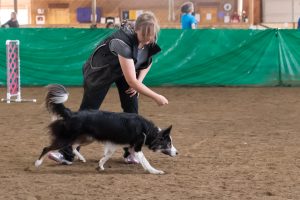 If your dog is actually opting-into agility, he won’t be sniffing too. That’s real, and something we should all consider. Most great trainers I know have a language they can use, a protocol they follow that takes out the guesswork in this area. A really simple way to start is by throwing all reinforcers to the ground for your dog to gather (that goes for tug toys as well as string cheese!) and then allowing your dog to return to you to ask for work–every time. If this notion makes you nervous there is probably a good reason.

Dogs do not blow us off, deliberately disobey, or any other such nonsense. They do what their reinforcement history tells them to do. In the game of dog agility we could get a lot better at layering difficulty in such a way that minimizes error, which means we should not be expecting to see much errors in our training. Any error made was either that of miscommunication (the handler failed to give the correct cue at the correct time) or misunderstanding (the dog is unclear about what is being asked) and in either case the handler’s first responsibility is to get her dog back to reinforcement as quickly as possible. That could mean making a loop and trying again, or it could mean giving an apologetic reinforcer and then breaking the skill down. When we look at errors this way, we start to listen to our learners about what they actually know. If you are asking for weave poles and your dog starts sniffing, that is a clear response that deserves your attention, not a chance to correct or inform.

Scatters: our counterintuitive lord and savior

Just throw food, people. It helps them chill out, it helps them divert their sniffing to actual food items, and it helps you have a second to make a plan. Throw food, throw it often, throw it liberally. You might have to trust me on this one.

Here are a few things I like my dogs to do sometimes, that are normal dog things, that are not useful in dog agility:

See what I’m getting at? A lot of behaviors that are really normal for dogs are not particularly helpful in agility. Some of these things (like barking) can be done while the dog is doing agility without much concern, but not all of them can (sniffing, lying down). Is it my job then, so see any of these behaviors as problems, or is it my job to light the path to reinforcement for other behaviors? 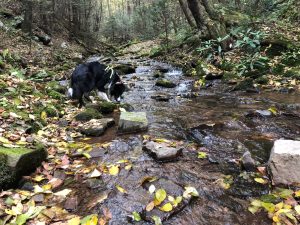 I think you know the answer here. If I really don’t want my dog barking during agility, then it is fully up to me to minimize barking during the learning process by keeping frustration levels low, and perhaps by using reinforcers that don’t evoke barking (like perhaps cheerios rather than crack-squirrels). It is never my job to inform my dog that barking is wrong, or will not be tolerated. I must always respect that barking serves a function for my dog, and that if I don’t like it I better minimize his need for that function. Same goes for sniffing. Like I outlined in the link above, there are a lot of reasons for sniffing. Sometimes the dog is stressed, sometimes there is a legitimate reason to sniff (like girl pee), but in all cases it is our job to be sure the desired behaviors are so potently reinforced that sniffing barely crosses the dog’s mind. Does that seem impossible? See my first point.

Patience, heard of it?

When I suggest to a person to allow their dog to sniff and to just wait for them to come back, without exception said person’s face turns white. Aghast with this suggestion, the handler’s stress spiral goes like this: “What if he never comes back? What if he pees on something? What if he takes someone’s food? What if he finds a mouse?” This spiral is ok; anxiety is not a rational thing, and I know that better than anyone. I let the person in front of my spiral and then I suggest, casually, that we just wait and see. That I know the dog will not actually sniff forever and that we will keep the dog from putting himself in danger. Lo and behold, the dog always eventually stops sniffing. And when he does, the handler marks and reinforces, then releases the dog to go back to sniffing. What if by allowing your dog to satiate this need before ever asking him to work, you were actually doing yourself a favor? You might try it. See how it feels. When you start to feel anxious about being perpetually rejected by your dog remember that whole butterfly thing: if it comes back it’s yours forever, if it doesn’t it was never yours.

If you’ve got a “sniffing problem” know that there are solutions because your problem isn’t actually ever sniffing. Relax, throw more food, and focus on what you do want to see. 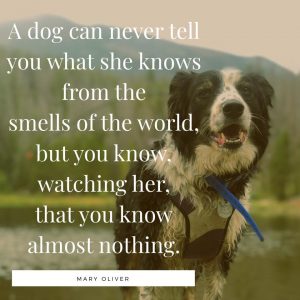