Sport Dogs and The Humane Hierarchy

The Humane Hierarchy is a ranking of the innate intrusiveness of behavior intervention. If you’ve not heard of it before I recommend reading Dr. Susan Friedman‘s paper on it here.

Simply stated, when addressing a behavior of concern we should follow these steps: 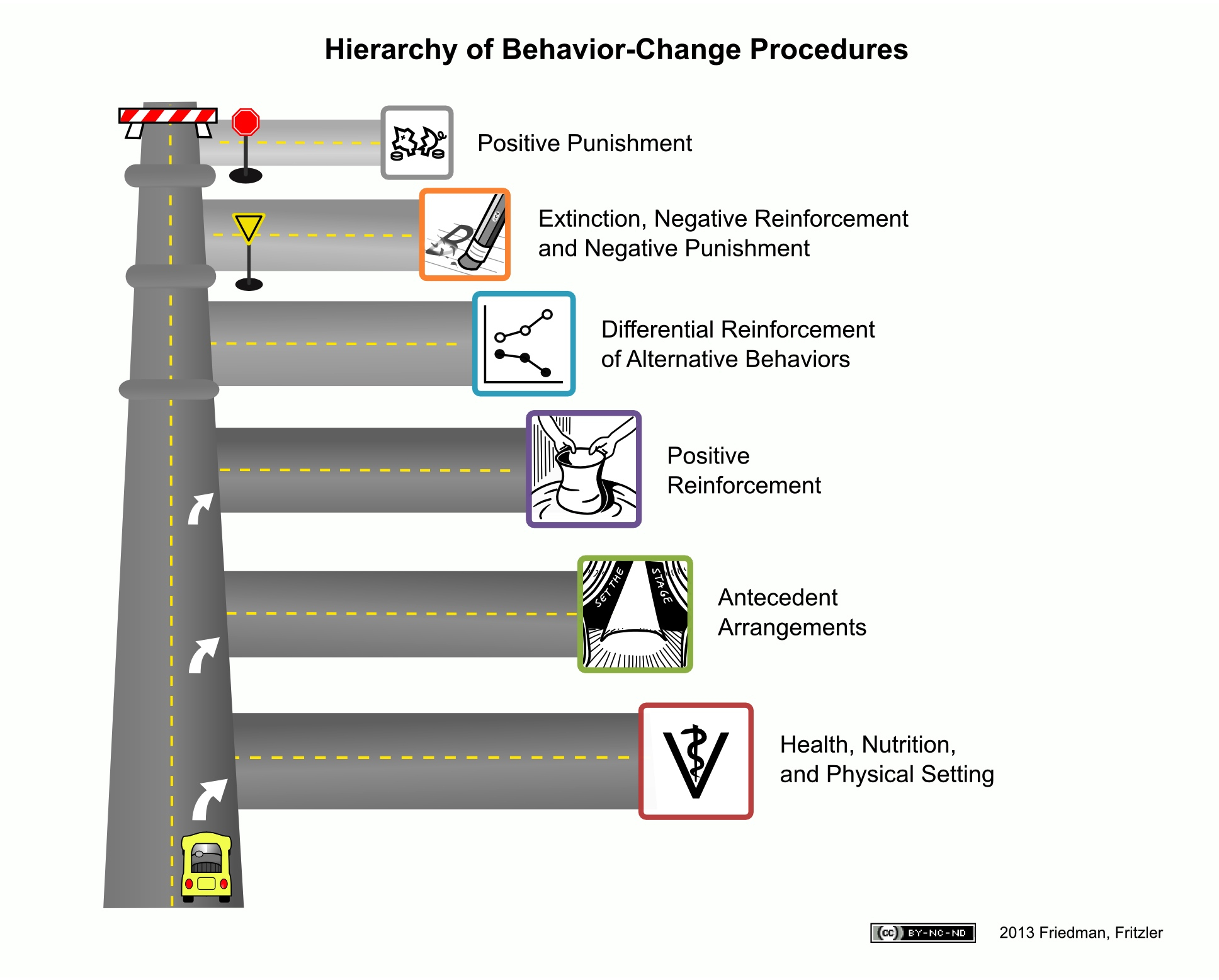 First address any of what Friedman calls “distant” antecedents that might be at play; namely the animal’s health, nutritional, and physical needs. My Four Steps to Behavioral Wellness fall under this category. If more intervention is required to address the behavior, we move to the second step.

Second alter what Friedman calls “immediate” antecedents in order to decrease the probability of the behavior of concern. In essence, this phase is that of environmental management. I am a huge proponent of manipulating the environment, not the dog, and I wrote about it here.  Sometimes problem behaviors do not dissipate with these two steps, which is when an ethical trainer moves to the third “stop” in the Humane Hierarchy.

Third trainers can apply contingent positive reinforcement that increases the likelihood of more-desired behaviors. This step is simply the “training” step in the phase. Once seeing to it that the dog’s needs are met and that his environment is not contributing to the problem, train him useful behaviors that can be engaged in instead.

Fourth, when the issue persists past these stages, Friedman lists that a DRA (differential reinforcement of alternative behavior) procedure can be implemented, meaning that a different behavior than the problem behavior will be reinforced while the existing reinforcement for the problem behavior is removed. For our purposes I would lump ALL differential reinforcement procedures into this category, and you can read about all of them here. Typically, this is where most trainers who are working within their skill level will see at least acceptable levels of success. If not, there are two more stops on the road.

Sixth, if the above steps have failed, which is quite rare for trainers working on cases that are within their current range of skill, positive punishment (contingent delivery of an aversive consequence) is considered. The ethical trainer will certainly choose her tools wisely here, and will likely consult colleagues before proceeding.

Positive reinforcement of a station behavior can help solve many behavior concerns.

I consider the hierarchy to be both imperfect and an excellent starting point for considering a behavior modification route. What’s unfortunate is how often performance dog trainers, without an understanding of this hierarchy of intrusiveness, jump WAY down the road to solve a problem. Contact performance issues are often met right off the bat with a negative punishment route (removal from the ring is typical, and is usually only done after the dog has had multiple repetitions of reinforcement for the incorrect response) when in truth, the positive reinforcement phase for this has usually not been truly exhausted. To understand how this hierarchy might be applied, let’s look at a common behavior of concern in agility: early release from the start line.

First, of course, the dog’s basic needs should be considered. Veterinary care, nutrition, and daily enrichment will indirectly influence your dog’s ability to maintain composure at trials, and therefore, on the start line. It may seem like overkill, but this needs to be considered first.

Second, careful consideration of what environmental management needs to take place must be done. For a start line stay issue I’d address the handler’s consistency in cues, her nerves at trials, and her understanding of what cues her dog to release or stay. I’d also be sure to address any discomfort with strangers or other dogs the dog might have; a dog that is worried about what is behind him will have a much harder time staying on the line. For these dogs, only short lead outs (or no lead outs) should be attempted.

Third a positive reinforcement plan of action needs to take place. Sadly, most people are still training stays in a reactive “correct them if they move” manner rather than with a positive reinforcement route. True training of the stay cue with skilled contingent application of appetitive consequences (treats, toys) must take place. If your dog struggles with the stay, ask yourself, how often do you actually reinforce that behavior? Too often in agility it is the release forward that is the only reinforcement offered for the stay, which can break the stay down over time. I recommend a release backward to reinforcement for this particular behavior, which is not only helpful to be sure the “stay zone” is where reinforcement occurs but is also quite sustainable–teach the dog to spin back to his leash as his reward and you’ve got a built in reinforcer you can take into the ring. Here is a video of this skill:

Fourth, if no solution has been arrived at or if, more commonly, the dog’s reinforcement history for the problem behavior is so strong that the handler or trainer is still seeing resurgence of the problem behavior, some differential reinforcement procedures may be considered. A cornerstone of differential reinforcement procedures is to be sure reinforcement does NOT occur for the undesired behavior; meaning that a dog who breaks out of a start line stay should not be allowed to continue running the course. The dog should get reinforced (either allowed to run or spun back to his toy/leash) for anything that is NOT premature breaking, and the dog should be either removed from the ring (the only option in most competition venues) or re-set to try again. During the time that this procedure is being carried out, it is important that the dog is not allowed to take one piece of equipment, which is where shorter lead outs should be done until the behavior is reliable. I often coach clients on smart application of this procedure for start lines only after all three of the above steps have been carried out.

Fifth a trainer might apply an extinction, negative reinforcement, or negative punishment procedure to the start line problem. Within my personal training ethics, I might apply a negative punishment procedure that was a simple removal from the arena or ring when the dog breaks the start line, that ends all future reinforcement for the dog for the time being. So, walking off the course and putting the dog up for a little while is what that would look like. This is used too liberally and without planning or consistency in our sport, and it saddens me. The only proper application of it is here, fifth, nearly dead last in our options. Not only should it be considered only after the previous four steps have been tried; I’d argue it won’t be effective without those steps in place either. Extinction and negative reinforcement fall outside the realms of my comfort for solving performance training problems.

For performance training purposes, my personal opinion is that the hierarchy stops here. The sixth and final stop in the road (and most of the fifth stop) outlined above may have a place in life-threatening behavior change scenarios, but they do not have a place in performance. However, for demonstration’s sake, let’s look at what that final stop might look like in our scenario.

Sixth the application of a contingent aversive consequence might be applied to the dog that breaks the start line. This commonly takes the form of a collar correction (yes, no matter how mild, it belongs in this category), throwing something at the dog, a person stepping on the leash the dog is still wearing (likely unbeknownst to him), a loud noise, a spray of water, or any other variety of yucky things dogs hate. The fallout of negative emotions is why this option is last, and why it doesn’t exist in my hierarchy of acceptable interventions for sport dogs.

The next time you are facing a performance struggle with your dog, consider these steps. Be sure you are not jumping down the line and skipping valuable stops in the road. Keeping the fifth and sixth stops off the table keeps our training “on its toes” so to speak; it sees to it that we truly exhaust all of our options, every time. As far as what is acceptable to us and what we will reach for first; we must all decide for ourselves, and certainly circumstances will change things from time to time. Honoring the dog’s experience is my cardinal rule and that cancels out a few options for me–something my dogs and I remain happy about.