The Dog, the Gorilla, and the Gun

Just a few days ago on May 28th a little boy somehow found his way into the Gorilla enclosure at the Cincinnati Zoo. Social media is awash in this story right now, so we all know that a gorilla, Harambe, was shot and killed by the zoo’s dangerous animal response team shortly after the boy entered the gorilla habitat. The boy was removed from the enclosure and is relatively unharmed.

Strong opinions and even stronger feelings are running rampant; and I am not here to argue for or against the decision to end Harambe’s life. The welfare of the little boy was defended only once his life was in peril; while the welfare of the gorilla was considered heavily up until that same point. What would happen if everyone’s safety had been better considered, from moment one? Would Harambe still be alive, and would a four year old boy’s family be happily non-traumatized, if the risks involved in having a small child anywhere near a wild animal had been truly considered? And what on earth does this have to do with dogs?

Supervision: The Lie We Tell Ourselves

Each year in the US about half a million children are bitten by dogs severely enough that they require medical attention. Kids are more likely to be bitten than adults, and they are far more likely to sustain serious injuries when a dog bites them.  Everyone knows this is a concern, and yet everyone is shocked when their dog bites a child. Often dogs are put to death in these scenarios. No one wants to risk that the dog will bite the child again. Similar to Harambe’s case, even the threat of danger toward a child can cost the animal in question their life. The problem here doesn’t have anything to do with dogs or children (or gorillas, for that matter). The problem here lies in the illusions held by the adults. Let’s talk about some of these illusions, because it could be that you hold one or more of them yourself:

That last one is where we’ve gotten into trouble, both in the household where dogs are roaming loose with children and at the zoo where dangerous predators are a stone’s throw away. Telling ourselves that “supervision” will keep everyone safe is a joke. We must not forget that animals and children are both thinking, breathing, moving beings with their own motivations and feelings. Anyone who has tried to keep total control over a toddler for any length of time will tell you it just isn’t possible. In the blink of an eye a child that is playing with her toys quietly will be examining the family’s dog’s ears, his mouth full of teeth mere inches from her face. In a split second a four year old boy went from watching a gorilla to meeting him. Safety measures must be in place whenever people and animals are to be together; and supervision just doesn’t count as a safety measure. 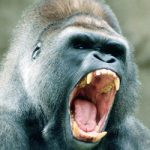 Welfare on All Fronts

Kids are going to do inappropriate things to the family dog. They also might find their way into the enclosure of a powerful wild animal. When we put children and animals in these situations we need to be thinking about the welfare of all parties for whom we are responsible. If you take your child to a zoo you must understand that the walls, bars, moats, and gates that stand between you and the animals aren’t just there to protect you and your children. They are there to protect the captive animals who are there through no choice of their own. Talking to your kids from early on about respecting such barriers, be it the glass between them and the swimming sea lion at the aquarium or the baby gate between them and the family dog is important. Realizing all barriers can be breached, and so never trusting them fully, is equally important. Knowing that our dogs are not playthings or lawn ornaments but rather intelligent creatures with brains, teeth, and autonomy is a responsibility we all must shoulder. Knowing the animals in zoos are not robots but rather thoughtful creatures with very little freedom might be a tough pill to swallow; but swallow we must.

When an adult chooses to have their child in the same space as ANY animal, it is that adult’s responsibility to consider not only their child’s welfare but the welfare of the animals. Part of that is being honest with yourself about the inherent risks involved; kids can’t understand what not to do to a dog, and a dog only has one means of defense–his teeth. Another part is accepting the serious consequence that falls on animals who endanger human beings; they pay with their lives.

The aftermath of the Cincinnati Zoo incident involved a whole lot of garbage but perhaps the most disturbing was the blatant victim-blaming aimed at the zoo staff and mostly, the boy’s parents. The same thing occurs when a dog bites a child. Social media is set ablaze with the fire of “that could never happen to me.”

I have news. It could.

The worst dog-to-child bite I have personally consulted on occurred in the best-managed household I’ve ever seen. An accident occurred, and because of the size of the dog involved, the damage was quite severe. The best parent, the best dog owner, a supervised situation, and the worst bite. Several hours of surgery later the child is ok, though permanently scarred. The dog is dead, a decision I supported in full. A family was traumatized and their beloved pet lost his life. This is what can happen, even when everything is done right.

A little boy being misplaced in a crowd long enough for him to fall into a gorilla enclosure is an accident too, and rest-assured, if you think you are too good of a parent (or dog owner) to fall victim to an accident, you’re kidding yourself.

Victim-blaming is an insidious reality of our culture. Why? It makes us feel safe. If we can state everything a person did wrong (she wasn’t watching her child, he didn’t train his dog effectively, zoos shouldn’t even exist, etc.) to get themselves into trouble, then we are safe from the same trouble. The problem is that blaming the victims of unfortunate circumstances and occurrences never illuminates what is actually at fault, and therefore keeps us farther from safety.

So, what then? What are we supposed to do? I’m the first person to say we’ll suffer if we focus too much on risk-avoidance, so what do I suggest when it comes to kids and animals?

We really have to do better by our captive animals. Perhaps a powerful animal like a gorilla should not be held in a small enclosure; or maybe he should have been guarded by a keeper at all times. Perhaps a large dog with the jaw strength to snap a tree branch should not be free with a child; ever. Perhaps.

What we could and should change is the dialogue we have surrounding these incidents; the ones that cost children their safety and often cost animals their lives. Rather than pointing fingers and playing the role of self-proclaimed expert we should empathize and discuss. Rather than claiming bad things only happen to negligent or stupid people, we could all face the sobering truth: bad things happen to everyone. The first step toward risk-avoidance is recognizing that risk exists, and not just for “other” people. Without this important step we will remain blissfully ignorant to the dangers before us, until tragedy strikes.